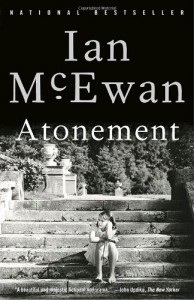 Atonement was a difficult book for me, to read and rate. There were some points I enjoyed it, but overall the experience was a bit of a let down.

The book is told mostly from Briony’s perspective during the period of the Second World War in England. There are also sections a few years on from her sister, Cecilia and Cecilia's partner Robbie.

When we first meet Briony she’s a child who’s planning to put on a play for a family member who’s coming to stay. She’s heavily interested in writing and as such has a vivid imagination. This imagination is the catalyst that dictates the events that shape the rest of her and others lives.

It took an awfully long time for anything of worth to actually happen and when it did it was a bit of a let down, however the quality of the prose sustained me. At times the writing was beautiful, but there was far too much description. I’m aware that much of this impatience for something of worth to happen is largely due to the way we live our lives today and have been conditioned to expect returns quickly, but the book was just badly paced. In today's world where every scene in a book should have a mission, this was largely absent.

Once I got further into the book, specifically when I was reading about Robbie’s experiences of the war, I became very intrigued. It did however go on for far too long, seeing my interest dwindle. In the end I just wished it'd be over. This was a typical pattern. This pattern of over long sections occurred throughout the novel; portions were much too long with little happening.

None of the characters were particularly likable, which was a chief reason I found the book tough to read. I need to care about at least one of the characters and I did when it came to Robbie’s part, but alas this was too little too late and the majority of my dislike of the book had been cemented.

There’s a film adaption but there’s no way I’m going anywhere near that right now. I may watch it at some point in the distant distant future, but for now I’d rather forget about it and find a great book. I detest these periods where I read things that are just okay and long for a great book.