Just One Day by Gayle Forman 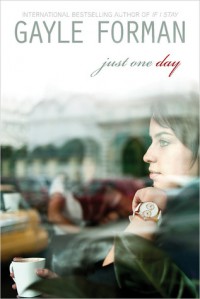 Like I said last week I’m writing a new adult book and thought it’d be a good idea to read some books along that line. The thing is, unlike the book I’m writing, virtually every new adult book out there has a romantic element and I literally roll my eyes at that stuff. I suppose you could call me a teeny bit cynical (had you guessed?) so I went into this with mild trepidation. Turned out what I thought would be a whole load of mushy loved up crap wasn’t overstated.

I’d heard of Gayle Forman-who hasn’t what with the film of If I Stay. This was the first I’d read of hers though and as it turns out she writes some pretty authentic characters.

The story was told from the perspective of Allyson, an American girl who’s just graduated from high-school and is in Europe with her best-friend Melanie. They’re seeing Europe as part of a touring holiday for American teens, aptly called ‘Teen Tours!’ Oh, and it wasn’t my idea to put the exclamation mark after the name of the touring company, that happened to appear every flipping time the words Teen Tours appeared. *rolls eyes*

On one of the last days of the trip Allyson is in Stratford Upon Avon and meets one of the actors in a Shakespearian play, Willem, a Dutchman. They get on well, but ultimately go their separate ways. The next morning when Allyson sees him on a train they get talking and she decides to spend the day with him in Paris. They have a great time together, but when Allyson wakes up the next morning she finds her Dutchman gone. She assumes he ditched her and with no way to contact him, not even his full name, she heads back to meet her friend in London, crushed by the whole thing. When she starts college she tries to forget about the one day she spent with Willem but can’t and decides to go searching for him. She wants to know if he really ditched her and thinks finally knowing the truth about why he left will help her to heal.

In the digital age where everyone is instantly contactable it was an interesting scenario to have this set up. I was a bit surprised that no-one mentioned how glaringly ironic this was in modern times, but anyway.

As I’m usually quite a cynic I did have quite a few problems with this book to begin with like, why can’t Allyson just let this go!? It was only one day! But once I started viewing things from the perspective of someone not quite so jaded as myself I started to enjoy it.

Quite a few locations were covered, like Paris, Mexico and New York, which was great, but the level of detail that makes this exciting wasn’t really there.

I liked Allyson and it was her that kept me reading. At times it felt like she was a little naive, but I liked how she thought and the trust she had in herself that she was doing the right thing chasing this guy she met for one day halfway across the world. The rest of the characters were okay, but there was nothing spectacular about them, at times feeling clichéd and there to advance the plot.

Throughout the story the recurrent theme was identity and I felt this was handled in a way that never took itself too seriously. Sometimes it did feel like this issue was forced into the plot though, rather than just being there, like when Allyson was at college. I think it might have been better with a bit more of Willem and Allyson actually being together, but it was still enjoyable and I plan to read more Gayle Forman.