Elizabeth is Missing by Emma Healey 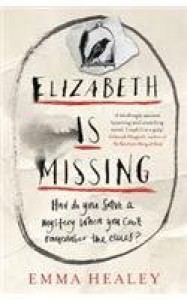 This book was fantastic and well worthy of the Costa First Novel Award.

It tells the story of Maud who is in her eighties and is suffering from dementia. She’s trying to piece together the mystery of the disappearance of her friend, Elizabeth. Because she has dementia, she writes herself notes to remind herself of things. She keeps finding some notes that trouble her, claiming Elizabeth is missing.

This story is not just about Elizabeth though, it interweaves the time in Maud’s life, seventy years previously, when her sister, Sukey, went missing.

This story is told in the first person and uses present tense when telling of the current search for her friend Elizabeth and when something triggers a memory, the reader slips seamlessly into the past tense. The use of present tense is always a favourite of mine and works extremely well here because it means the reader feels like they are living Maud’s life minute by minute and are witness to her decline.

Maud would be considered an unreliable narrator as her mind is slipping further throughout the novel and at one moment she remembers things and the next she doesn’t. I didn’t find this infuriating for the most part, it was only at the end, when her dementia is at its worst, that I got a little confused. I had to re-read the epilogue twice to make sure I got it correctly!

What struck me most about this novel was the voice. It was amazing to think that the author had entered the mind of an elderly woman with dementia so convincingly. Aside from that, the other characters were well-done, if not a bit thin. The dialogue was always authentic and smooth. There were also numerous things, mentioned throughout the novel which has significance later on. What I would say, is don’t take too long to read this one. It’s a short novel anyway, at just over 300 pages, but because of the significance of earlier happenings, you’ll get the most benefit by reading it in a few days. I wouldn’t say it’s a hard read, but again it’ll resonate more if read in a shorter time span.

There were a couple of reasons I haven’t given this five stars. One is the confusion I felt at the end, forcing me to re-read the epilogue and secondly I thought to myself, if Maud’s daughter, Helen, kept repeating things that Maud had forgotten, why then didn’t she keep repeating the details of what had happened to Elizabeth!? It would have saved a lot of time, but I guess then there wouldn’t have been a story! I also felt that the ending was a bit much.

People have discussed that this could have been told as a short story instead of a novel. I can see that point, but then we wouldn’t have seen so much of Maud’s character, which I really enjoyed. Also, I think it would have diminished the power of all the strands that came together so well.

An excellent read, that was at times dispersed with humor to balance the weighty topic and one that'll stay with me a long time.