An Inspector Calls by J.B Priestley 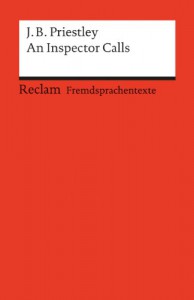 I listen to a talk radio show a lot (LBC) and recently they mentioned a story concerning a class of school children who'd been asked to write a suicide note from the perspective of the dead character in this play. I think that was it anyway. I'm not too sure. Anyway, this shocked me a little and I wanted to read the play for myself as I didn't know much about it.

I'll give you a quick overview. A family have just had dinner when an Inspector calls over. He relates the news of a death of a young woman who they're all connected too and as the story progresses they each find out in what way they wounded or let her down, subsequently playing a role in her death.

The plays great strength is highlighting the human condition; the way in which people minimalise their misdeeds and often don't think about the far-reaching impact of their actions.

The play also highlighted how the divide between rich and poor often leads to intolerable conditions for the working classes and how this is often minimalised and forgotten by the rich.

There was a nice little twist of sorts towards the end. It gave it a little extra oomph and left me to think about it for quite a while.

I read it for: